This lab assignment deals with using engineering computation to numerically integrate the differential equations generated from modeling the dynamics of a system. The process of integrating these time dependent equations is called "simulation". Simulation is a powerful tool for studying both linear and non-linear systems. In this case, the differential equations are provided to you and your job is to translate them into correctly functioning m-files and show through plots that the simulation is working as expected and make some observations about the system's behavior. As we move forward in the course you will apply this method to other problems.

We have created a guide that explains how to create a working simulation of a simple torque driven pendulum system. Using this guide, your goal for this lab is to apply the same methods to the vehicle dynamics example problem described below.

Below is a schematic of a simple model of this system. This schematic is explained in detail in Chapter 10 of the course textbook, but for the purposes of this lab you will need to have a basic understanding of the geometry. The fixed axle wheelset is connected to the car by four linear springs of stiffnesses \(k_1\) and \(k_2\). The car and the center of the wheelset are moving at a constant speed \(V\). The wheelset can move laterally relative to the car and tracks. This lateral deviation is tracked by the time varying variable \(q_1\). The yaw rotation angle of the wheelset relative to the car and tracks is measured by the time varying variable \(q_2\). The wheel-track connection is modeled by concave wheel surfaces rolling on a convex track surface with radii \(R\) and \(R'\), respectively. When there is no lateral deviation and no yaw angle, \(q_1=q_2=0\), the nominal radius at the wheel-track contact location is \(r_0\) and the angle of the line tangent to the connecting surfaces is \(\delta_0\). 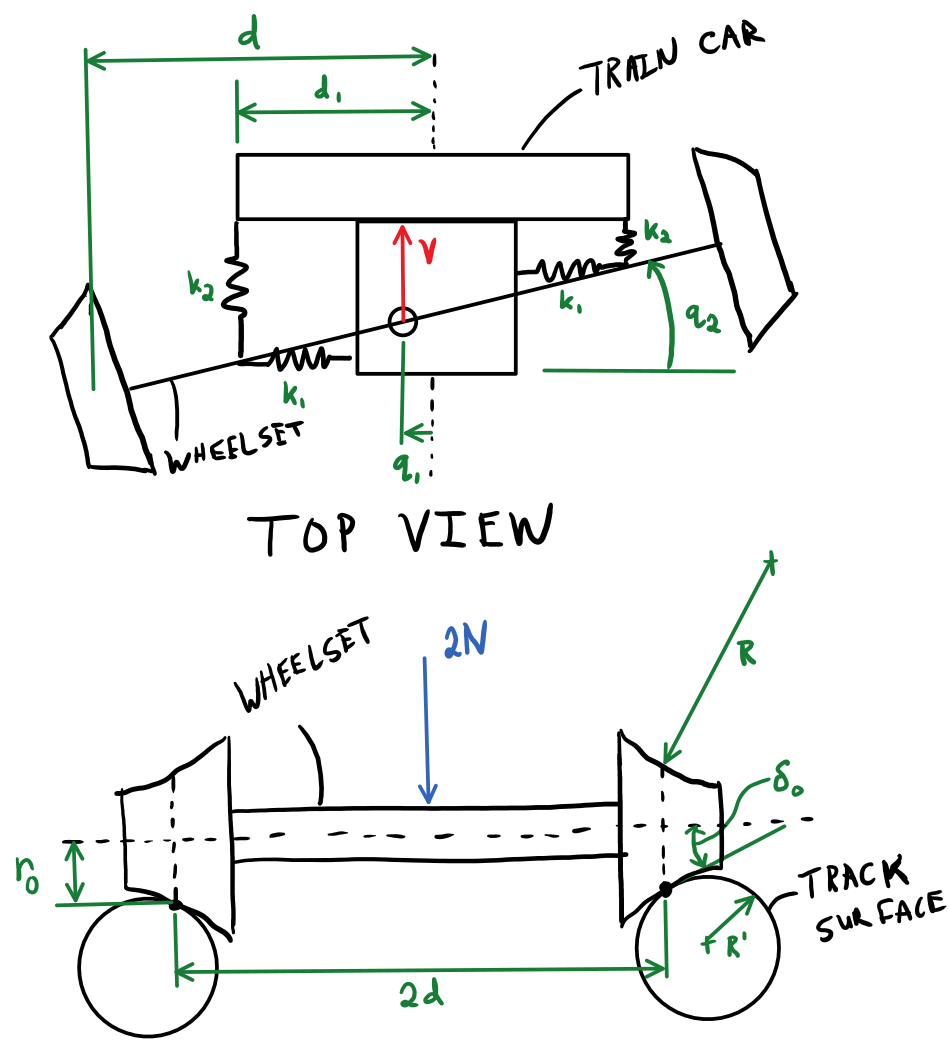 Figure 1: Schematics of the train wheelset model. See figures 10.1, 10.2, and 10.3 in the book for more detail. The upper figure is the top view and the lower figure is a rear view.

With careful attention to formulating the kinematics and dynamics, the explicit coupled first order linear ordinary differential equations that describe how the dynamics of the system change with respect to time can be found. You will learn how to generate these equations as we move forward in this class. For now, we provide you with the resulting four equations:

These equations define expressions for the derivatives of the four time varying state variables \(q_1(t),q_2(t),u_1(t),\) and \(u_2(t)\) which are described below.

The majority of the variables in the four differential equations above do not vary with time, i.e. they are constant. Below is a table with an explanation of each variable, its value, and its units. Note that the units are a self consistent set of SI base units.

A train designer may be interested in knowing how much force is applied to the wheels at the contact location from the track so that they can size the components appropriately. The lateral and longitudinal wheel contact forces on the right wheel can be estimated by these functions:

You will use the section Outputs Other Than The States to compute these values.

You will also have to decide on how long your simulation will run and at what time resolution you should report values of the states, inputs, and outputs. Some rules of thumb for making these choices:

Use these rules of thumb to select a simulation duration and time step spacing for your simulations.

In your lab report, show your work for creating and evaluating the simulation model. Include any calculations you had to do, for example those for initial conditions, input equations, time parameters, and any other parameters. Additionally, provide the indicated plots and answer the questions below. Append a copy of your Matlab/Octave code to the end of the report. The report should follow the report template and guidelines.

Use the templates below for developing your code and fill in the missing pieces.

Provided below are templates to utilize in coding the first lab. Your code should be identical to the templates, but it is your job to fill in the missing information.

Solving the Integration of ODEs