In this lab, you will investigate the longitudinal dynamics of a car in a drag race in which the motion is governed by a model of longitudinal tire slip. This drag race is a little special because it has a patch of ice part way down the track. You will explore the performance on this partially slippery track and then add a simple traction control system to attempt to improve performance.

This is a video of a variety of cars in typical drag races:

Watch the car tires carefully and notice the large deformations that occur. This is a contributor to "tire slip".

A car accelerating along flat ground can be reasonably modeled by the coupled dynamics of a particle with the mass of the car \(m\) that is pushed along by a propulsive force and is resisted by a force that models air drag. The propulsive force is arrived at by modeling a single wheel which has a spin moment of inertia \(I\) equivalent to the four wheels, bearing friction \(\tau_B\), wheel-ground contact friction \(F_f\), and an applied torque \(\tau\) arising from an idealized drivetrain. The propulsive force is then equal in magnitude to the friction force generated at the wheel-ground contact. Figure 1 provides a free body diagram of the system. 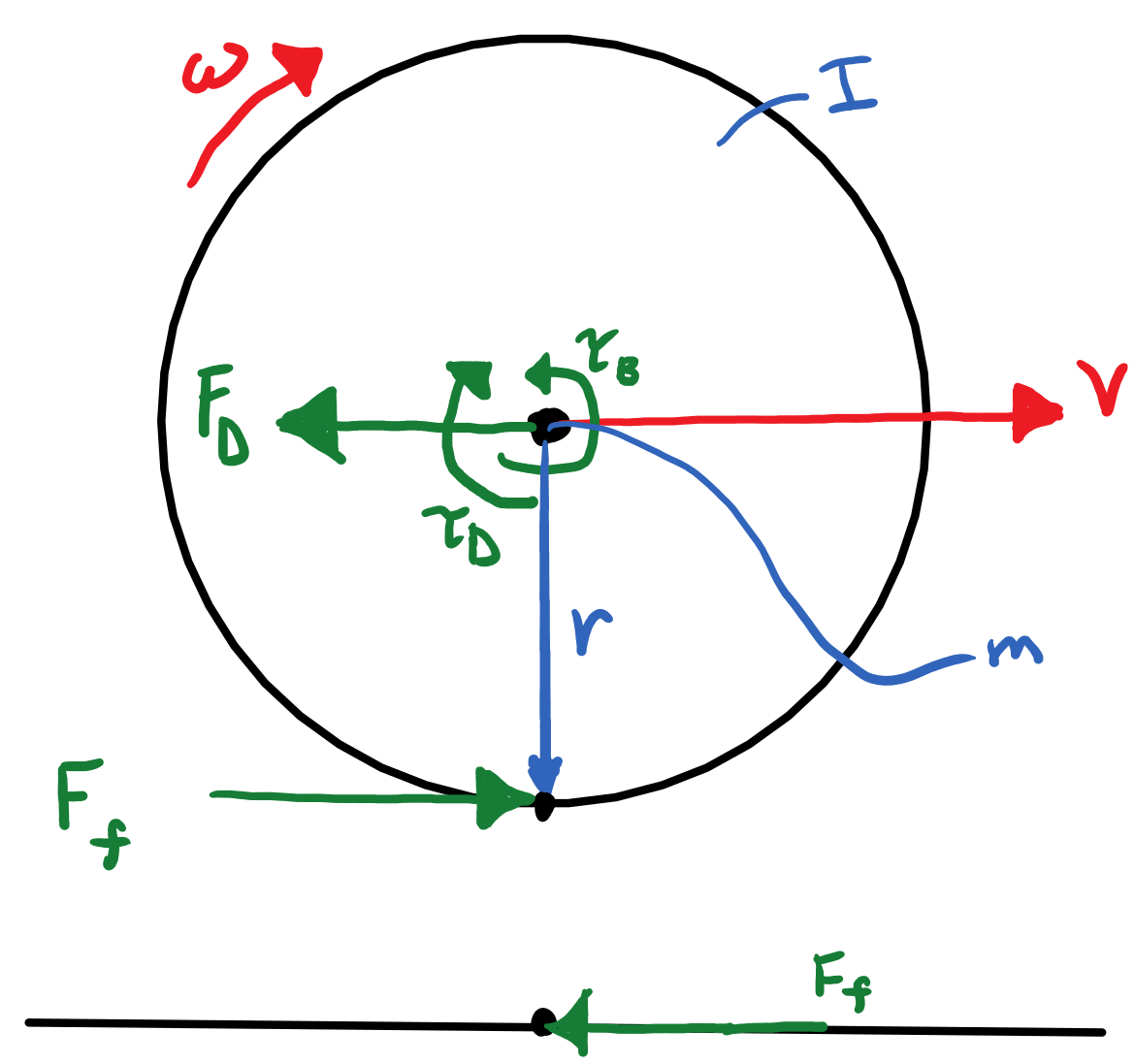 The particle representing the car only has forward motion and its position is tracked by the time varying variable \(x\) as wells as its velocity \(v=\dot{x}\). The drag due to air resistance can be modeled by the drag equation:

The wheel can be modeled as a rotating disc with a radius equal to the effective rolling radius of the cars' tires \(r\). The rotational acceleration of the wheel is increased by an ideal applied torque \(\tau_D\) from the drivetrain. The rotational motion is resisted by bearing friction; modeled with a simple viscous damping model where \(b\) is the damping coefficient:

Lastly, there is a torque generated by the ground friction:

The friction force \(F_f\) can be modeled by a Coulomb-like equation which has a coefficient of friction \(\mu\) that varies with the drive slip ratio \(s_D\) and is proportional to the normal force \(F_N\) (the car's total weight in this case).

You will need to form Newton's Second Law and write it as two first order ODEs for the particle representing the car's longitudinal motion:

Next you will need to form Euler's Second Law for the wheel:

Make sure that you have correct signs on the elements of each summation above.

These can be written as four first order explicit ordinary differential equations:

These equations define expressions for the derivatives of the four time varying state variables \(x,v,\theta,\omega\) which are described below.

The friction force \(F_f\) and the driving torque \(\tau_D\) should be treated as inputs to the above equations of motion. These input equations should be defined in a input function. See Time Varying Inputs for more information. The inputs function should take in the time, current state, and constants structure and produce a vector with \(\tau_D\), \(F_f\), \(s_D\), and \(\mu\).

The driving slip ratio \(s_D\) characterizes the actual forward velocity relative to the ideal pure rolling velocity and is defined as:

The longitudinal coefficient of friction \(\mu\) is a function of the slip ratio. This relationship is empirically derived for different tires and ground surface types. A mathematical model that does a good job at describing this relationship is: 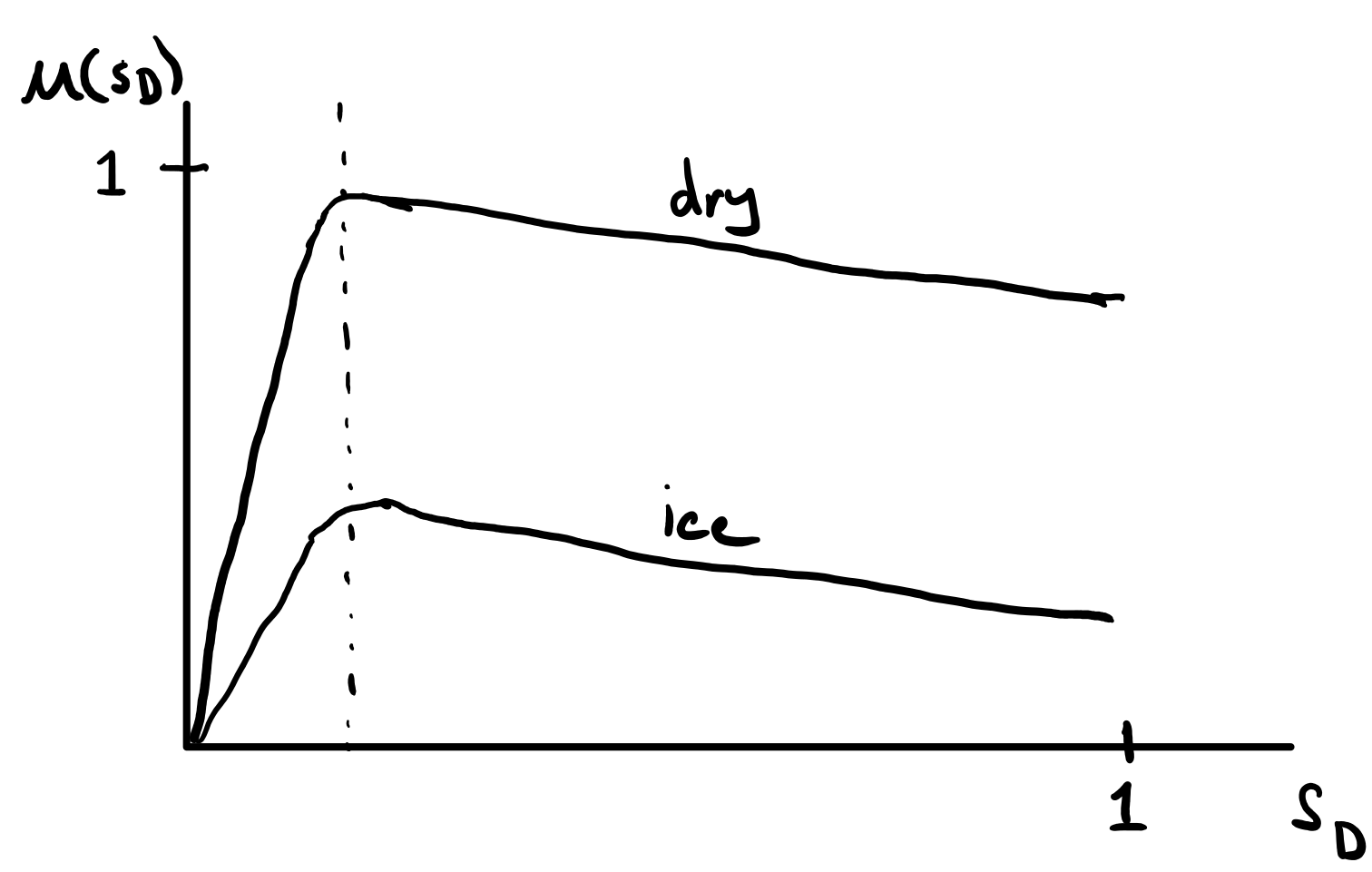 Figure 2: Typical relationship between the slip ratio and the coefficient of friction.

The race track will be 200 m long with a patch of ice between the 50 m and 100 m marks. You'll need to switch between the two sets of friction equation coefficients at the boundaries between dry and icy. You may be inclined to switch between these two conditions instantly, but numerical integration routines like ode45 are designed to work with continuous functions, so the switch between dry and ice and back will need to be a smooth transition. The logistic function provides a nice way to smoothly transition between two values. Below are the equations to calculate the coefficient values for any value of \(x\). You'll need to implement these using some form of control flow like an if-else or switch statement for each of the coefficients \(A,B,C,D\). 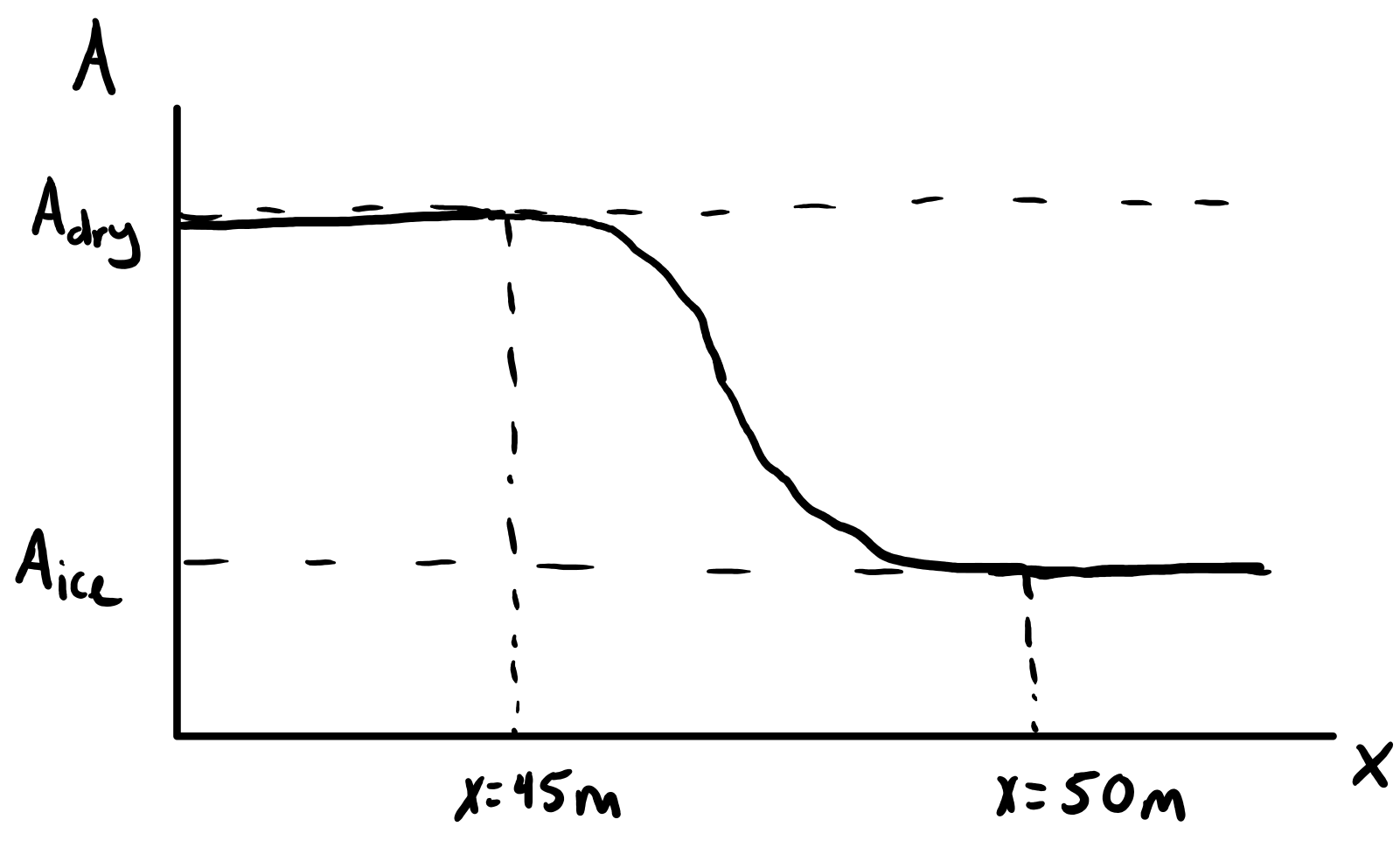 Figure 3: Use of the logistic function for a smooth transition between the coefficients.

The following shows the piecewise function for \(A\):

In the without traction control case, \(\tau_D\) should computed assuming the input power is a constant and always at its maximum \(P_{max}\). This assumes that the car's transmission is ideal and is always at the right gear ratio to operate at the engine's peak power output. \(\tau_D\) should then be governed by the current angular rate of the wheels \(\omega\). This models "flooring" the gas pedal and shifting the transmission perfectly to always maintain maximum power to the wheels.

For the traction control case, you will implement a simple proportional feedback traction control system that governs the torque by assuming you can measure the slip ratio and can calculate the error between it and a desired value \(s_{D peak} - s_D\). The driving torque will then be set to a gain \(k\) multiplied by the error. Thus torque will be increased with the error is growing and decreased when shrinking.

You'll need to determine the slip ratio that corresponds to the maximum coefficient of friction for the dry and icy conditions and use that for \(s_{D peak}\). Use the average of the dry and ice slip values as the \(s_{D peak}\) for simplicity. The gain \(k\) should be a positive value. You'll need to try different values to home in on the best performance for your car. Inspect the \(\mu\) and \(s_D\) curves versus time to see if this is behaving as expected. Also, the value of \(\tau_D\) produced by the controller should never cause the input power to be higher than \(P_{max}\). So always take the minimum of \(\tau_D\) in the without control case vs. the with control case to stay under the maximum power limit. In other words, the controller can't draw more power than \(P_{max}\).

Your outputs should include all of the state trajectories and include the trajectories of the time varying slip ratio, coefficient of friction, driving torque, and friction force which have been computed already above in the state derivative and input functions. Additionally, compute the total energy consumed in traversing the 200 meter race distance. The time rate of change of the input energy is the input power which is related to the torque applied to the wheels and the angular rate of the wheels:

The input energy can be added as a fifth state variable to recover the total accumulated energy consumed. The trajectory of the power should also be added as an output variable.

You will use the section Outputs Other Than The States to compute these values. The outputs function should take in the time, current state, input function handle, and constants structure and produce a vector with \(\tau_D\), \(F_f\), \(s_D\), \(\mu\), \(P_{in}\).

The majority of the variables in the five differential equations and input equations above do not vary with time, i.e. they are constant. Below is a table with an explanation of each variable, its value, and its units. Note that the units are a self consistent set of SI base units.

Start the car with an initial forward speed of 1 m/s (a rolling start) and set the wheel angular rate such that the wheel is purely rolling with no slip. All other states can be initialized as zero. See Integrating the Equations for how to set up the initial condition vector. Make sure that your initial conditions are arranged in the same order as your state variables.

Simulate the system for 10 seconds with time steps of 1/100th of a second. If your simulation is working with the provided constants you should see just over 300 meters of travel in 10 seconds.

Make sure to construct the simulation in stages. Here is a good path: