In this lab, you will investigate the planar dynamics of a car being steered through a lane change maneuver. The ability for the car to maneuver as expected given a steering input depends on the car's ability to generate and direct the lateral forces at the front and rear wheels. At a basic level the car designer can manipulate the car's geometry, weight distribution, tire type to control the base dynamics of the vehicle. The designer can then design and tune other aspects in the suspension system to obtain even better performance. You will investigate the dynamics without suspension considerations to get an understanding of the car's basic motion and performance in a lane change.

The following video gives an introduction to rear wheel steering that can provide some background to one of the simulations you will do:

You will model and simulate a car traveling on a planar surface. The car will be able to steer both the front wheels and rear wheels relative to the chassis. The normal force is assumed to be equal on all of the wheels, i.e. no load significant transfer from cornering. The tires will be assumed to be pure rolling and the vehicle's forward velocity is constant. The lateral forces at the wheels will be modeled using the linear relation to slip angle and thus the model is only valid for small yaw and slip angles. You will investigate the effects on vehicle behavior when it is setup as an understeering and oversteering car. This model is called the "bicycle model of the car". The derivation of the model and analysis are presented in Chapter 6 of the book. 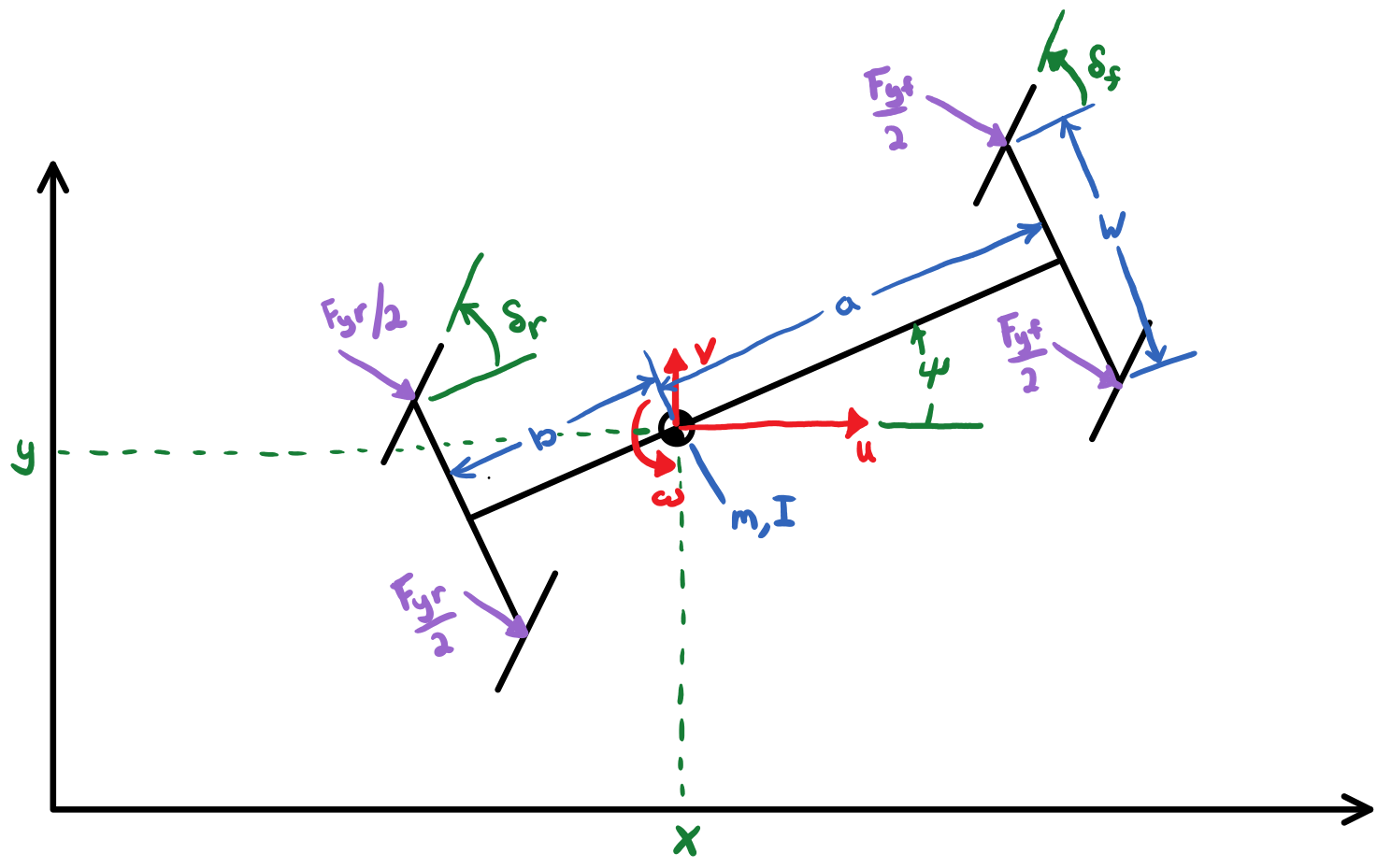 The equations of motion for the bicycle model of the car are presented below in the canonical linear form. The factor of 2 accounts for the combined affect of the pairs of tires at the front and rear, i.e. \(C_f\) and \(C_r\) are the cornering coefficients of the individual front and rear tires, respectively.

These equations define expressions for the derivatives of the four time varying state variables \(y,v,\psi,\omega\) and the two time varying input variables \(\delta_f,\delta_r\) which are described below.

You will need to write these equations of motion as four explicit ordinary differential equations in first order form for your state derivative function. You will use the section Defining the State Derivative Function for these equations.

The front \(\delta_f\) and rear \(\delta_r\) steering angles can be set to desired functions of time in your input function. You will setup two input functions that will steer the automobile through a lane change using for these scenarios:

The output function should return all of the state variables, the two steering angle inputs, the combined lateral force at the front and rear tires, the travel distance in the \(x\) direction, and the lateral acceleration. The lateral forces at the combined tires can be calculated with:

Your state derivative function can calculate the lateral acceleration. You will use the section Outputs Other Than The States to compute these values.

The majority of the variables in the differential equations and input equations above do not vary with time, i.e. they are constant. Below is a table with an explanation of each variable, its value, and its units. Note that the units are a self consistent set of SI base units.

Simulate the system for 10 seconds with time steps of 1/100th of a second.

An automobile can be classified as oversteer, understeer, or neutralsteer based on relationship between lateral force generation at the front and rear for the vehicle. The so called understeer coefficient \(K\) determines whether a given car is one of the three: