In this lab, you will investigate the longitudinal (altitude and pitch) flight dynamics of a quadcopter traveling at a constant forward speed. This vehicle relies completely on the independently controlled thrust generated by pairs of rotors at the front and rear of the vehicle to change altitude and its pitch orientation. The vehicle is very much unstable and requires controllers to maintain a desired pitch angle and to control altitude. The following video shows an autonomous quadcopter that can avoid obstacles using a combination of vision detection to determine relative locations of the obstacles and a feedback controller to avoid the obstacles given the computed desired path of motion. You will develop the feedback controller portion of a system like the one shown.

You will model the longitudinal dynamics of a drone flying at a constant forward speed \(U\). The vehicle can be modeled as a single rigid body with pitch centroidal moment of inertia \(I\) and mass \(m\). Use an inertial coordinate system with coordinate \(x\) to measure the horizontal travel and coordinate \(z\) for the vertical travel. Use the standard of positive \(z\) pointing downwards. The front rotors are separated from the rear rotors by distance \(a + b\) and the mass center lies at distance \(a\) from the front rotor and distance \(b\) from the rear rotor.

The vehicle will have four forces acting on it. The two pairs of rotors produce the thrust force \(F_f\) at the front of the vehicle and the rotors at the rear produce thrust force \(F_r\). The weight of the vehicle \(mg\) is the third force and the fourth force is the drag force acting perpendicular to the quadcopter's body \(F_D\) at the center of pressure (equal to aerodynamic center in this case) which is equidistant from the to rotors. The drag force should be modeled by the equation:

This drag force will not affect motion in the \(x\) direction since \(U\) is specified to be constant but you will need to determine its contribution to resisting vertical motion. Make sure that the force is always in the opposite direction of the component of \(\bar{v} = U \hat{x} + W \hat{z}\) that is perpendicular to the vehicle (same as \(F_D\)) using the signum function, sign() in Matlab/Octave. Neglect any lift that may be produced due to the vehicles angle of attack or body characteristics.

\(v\) in the equation for \(F_D\) is the scalar component of velocity of the center of pressure (CoP) that is parallel to \(F_D\). If you write the velocity vector of the CoP in the body fixed reference frame you can get this component like we have for other body fixed velocity calculations. 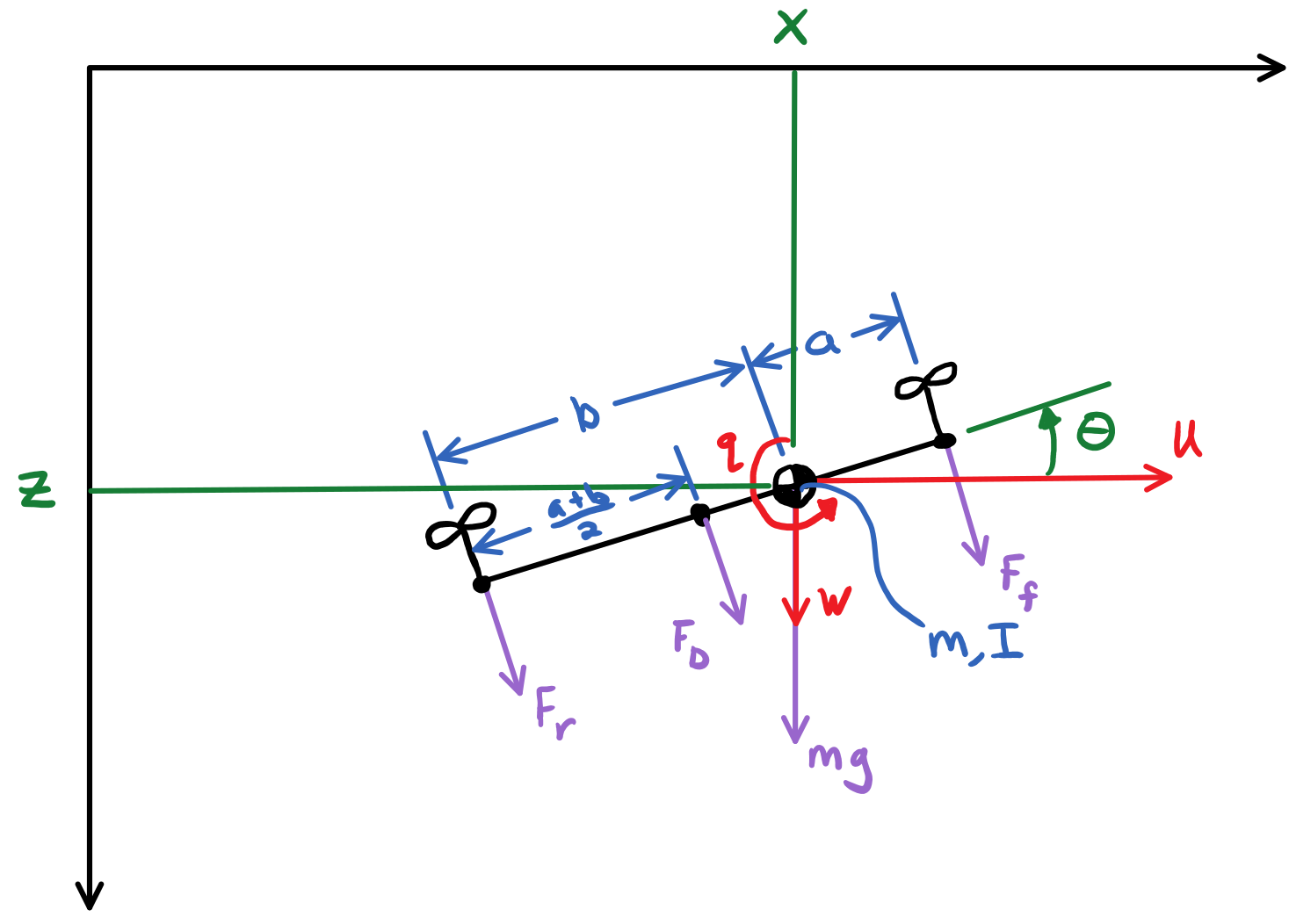 Figure 1: Schematics of the longitudinal quadcopter dynamics. The vectors are all drawn with a common sign convention, positive in the direction of the arrow.

You will need to derive the equations of motion for this system. Using the coordinates described above write the non-linear Newton-Euler equations. You will be expected to show this work in your report. Note: Use inertial coordinates not body fixed for the derivation. There will be two equations, one for vertical deviation from equilibrium and one for pitch deviation from equilibrium.

There is no acceleration in the \(x\) direction so you do not write an equation for that coordinate. This is because we are imposing the assumption that the thrust is always the perfect amount to maintain constant forward speed irrespective of the pitch angle and thrust contributions from the rotors.

It will be useful to rewrite the two force magnitudes in terms of the total force \(F_T = F_f + F_r\) so that you can control \(F_T\) to control altitude and regulate \(F_f\) for pitch control. Eliminate \(F_r\) from the two equations.

The state and input vectors would then be:

The time varying variables are:

You will need to formulate the equations of motion as four explicit linear ordinary differential equations in first order form for your state derivative function.

The quadcopter will simply spin to its death as it falls to the ground without any control. You will develop two Proportional-Integral-Derivative (PID) controllers. One will be used to stabilize the vehicle in the pitch degree of freedom and maintain level flight. The second will be used to maintain a desired altitude. Your input function should return the two forces \(F_T\) and \(F_f\). The controllers take this form in the time domain:

Proportional term
Applies control that is proportional to the error: desired minus the actual. This term gives a spring-like effect to your controller, e.g. the larger the pitch angle is away from the desired the more force the controller applies to force the pitch angle to the desired angle \(\theta_d\).
Integral term
Applies control that is proportional the integral of the error. This term is included to reduce or eliminate steady state error in the step response of the controlled system.
Derivative term
Applies control that is proportional to the derivative of the error. This term provides a damping effect to the controlled variable which can control overshoot and even eliminate oscillation for a critically damped response. The desired rates should all be zero only desired coordinates need be set.

There are techniques to select PID gains for a known linear plant model that have a desired step response. You have or will learn about these in EME 172. You can also design a controller with manually tuning for a non-linear system that has reasonable number of inputs and outputs, which we have with this drone model. Watch the video below to get an idea of how one can systemically tune a PID controller for desired performance by first trying P gains to get a stable response, then D gains to reduce oscillations, and I gains to reduce steady state error.

Once you have your systems simulating with no control (the drone should fall to the ground spinning chaotically), follow these steps:

Integral of the error

The proportional and derivative error terms are straight forward but how do you obtain the integral of the error?

Recall that ode45 integrates equations with respect to time. You need to integrate the error with respect to time from \(t=0\) to the current time \(t\) to obtain the cumulative error in the controller. To do so you can introduce two new state variables for the cumluative error \(\theta_c\) and \(z_c\). Add these two state equations to your state derivative right hand side function like so:

Note that the computed states are then the term you desire:

If you can't get this part working you can still control the vehicle with two PD controllers, you'll just have stead state error.

Once you have selected all six gains and have good simultaneous step responses for \(\theta\) and \(z\) you can now track an altitude "path" for a 20 second simulation. Setup your input function to have a desired altitude of:

Simulate the controlled system for this input and plot all the requested output variables.

For the plots that include \(z\) and \(w\) on the plot's ordinate axis it is helpful to reverse the axis so the negative values are above the positive values. To do so you can use this code after you call plot():

The majority of the variables in the differential equations and input equations above do not vary with time, i.e. they are constant. Below is a table with an explanation of each variable, its value, and its units. Note that the units are a self consistent set of SI base units.

The output function should return all six of the state variables, the travel distance \(x\), the two rotor forces \(F_f,F_r\), and the desired altitude \(z_d\). Include these ten time varying variables in your simulation plots. You will use the section Outputs Other Than The States to compute these values.

For the simulations, set the initial conditions all to zero.

Simulate the system for 20 seconds with time steps of 1/20th of a second for all simulations.

The following function animate_drone.m function will create an animation of your drone flight simulation. You can use this to visualize the simulation and assess the controller's performance.