To view the system response to driving over a pothole, you need to:

The sprung mass, \(M\), represents a quarter of the weight of the car that is located above the shock absorber. The shock absorber is represented by a linear spring and damper in parallel. The unsprung mass, \(M_u\), represents the mass of the wheel and tire. The spring between the unsprung mass and the ground represents the stiffness of the tire. Power flowing from the system to the ground is considered positive (note the direction in which positive velocity is defined). 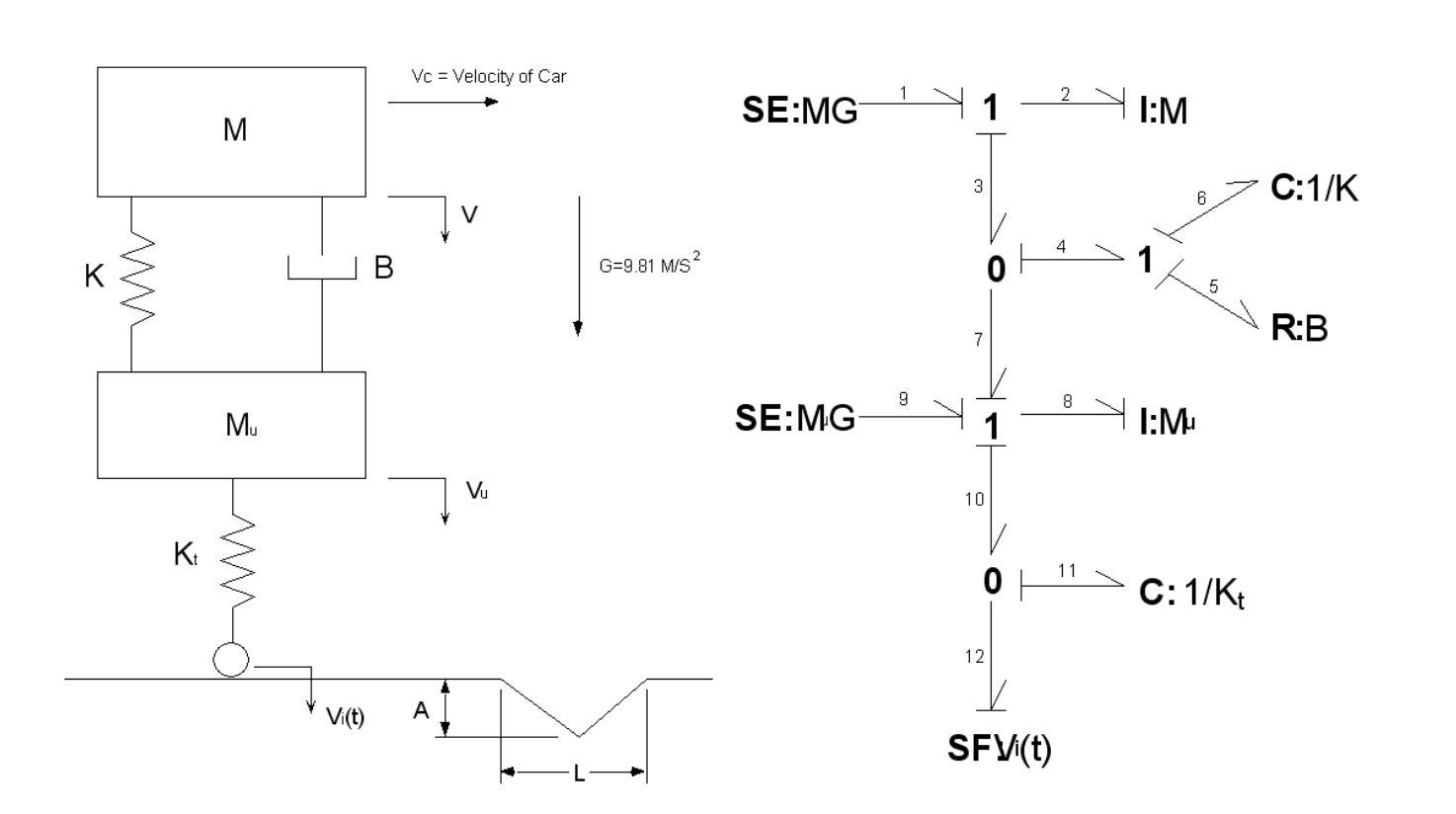 The state equations derived from the bond graph are as follows:

where the time varying states are defined as:

It will once again be useful to find the vertical displacement of the road, \(y_i\) [m], to visualize the shape of the road. An additional state equation and state \(y_i\) can be added to the above minimal set of equations to calculate the road height. You have to add this as a state equation and not an output equation because it requires integration to compute.

The quarter car is defined by the following constant parameters:

The pothole input is defined by the following constant parameters:

The initial velocities of the two masses should be set to zero, which implies that the momentums are also zero:

The single input to the model is the vertical velocity of the road \(v_i\) as seen from a reference frame that translates with the forward motion of the car. This velocity will vary over time and be partially determined by the travel speed of the car.

Remember a positive number represents compression. Include this output in your report and be sure to discuss what you learn from it.

Another output that is useful is the sprung mass acceleration, as this acceleration will correlate to the forces the car's frame and the passengers experience. Include this output and explain what you learn from it.

You need to determine the desired maximum time step to ensure that the simulation outputs capture all important variations with respect to time. To determine the time step you need to think about the dynamics of the system. Useful values to help you do so are the natural frequency and damping ratio of the masses. For example, the natural frequency of the sprung mass is:

This gives you an estimate of the oscillation frequency of the system. Note that you have two springs, each with different natural frequencies. You can calculate the natural period of each to get an idea of the minimum time resolution you may need.

The damping ratio of the sprung mass is:

For an over damped system, this gives you an estimate of of how fast the oscillations will exponentially decay. Remember that the decay function takes this form:

If the system oscillates very rapidly you will want a shorter time step. If the oscillation is very slow or if there is a huge amount of damping, the time step can be longer. Ensure that there are at least 10 data points per oscillation for the shortest duration period you determine. Also, ensure that the total duration of the simulation includes data up to a decay of \(2\tau\) seconds. Finally, inspect the simulation results and if you think that time resolution doesn't show enough detail in parts of the motion, decrease the time step until it does show sufficient detail. Be sure to explain what you choose and why.

Submit a report as a single PDF file per group to Canvas by the due date that addresses the following items. The report should follow the report template and guidelines.