Lab 5: The Drowning of Sacramento

Sacramento has built a new hydroelectric power plant. A previous company designed the plant without performing a simulation before the construction. After the plant was completed, and the California monsoonal rains came, the surge tanks could not withstand the dynamics of the flow and the city flooded. Fortunately, the people of Sacramento are great swimmers. Later it was found that the company was staffed with graduates from some junior university from the bay area. The reputation of your fine UC Davis education has gained the confidence of Sacramento's city council, which has refused to pay the bad company, and has hired you to redesign the surge tanks so the town won't have to hire as many lifeguards this spring.

Surge tanks act as hydraulic "springs", absorbing the pressure increase associated with stopping the momentum of the fluid in the pipe. However, because of the reconstruction, our surge tanks must be drilled in stone and this is very expensive for large diameter holes.

Figure 1 provides a hydraulic schematic of a reservoir that feeds a hydroelectric turbine. There are two surge tanks that store and release hydraulic energy to help provide a steady flow through the turbine. 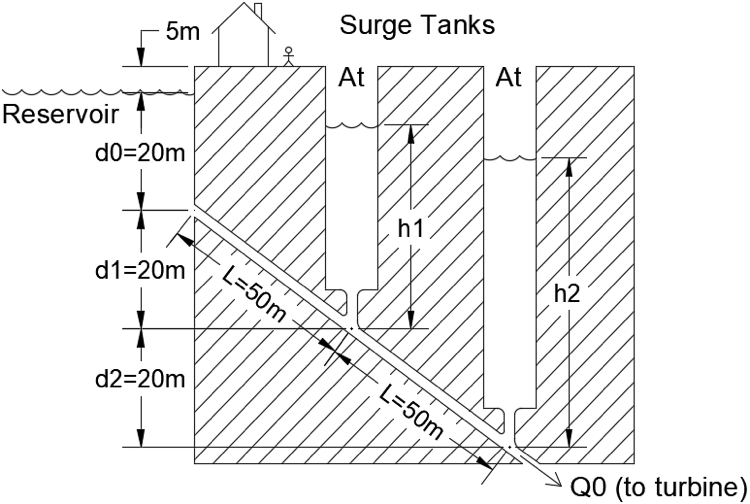 Figure 1 Schematic of the hydroelectric dam with reservoir and surge tanks.

The bond graph for this system is shown below in figure 2. 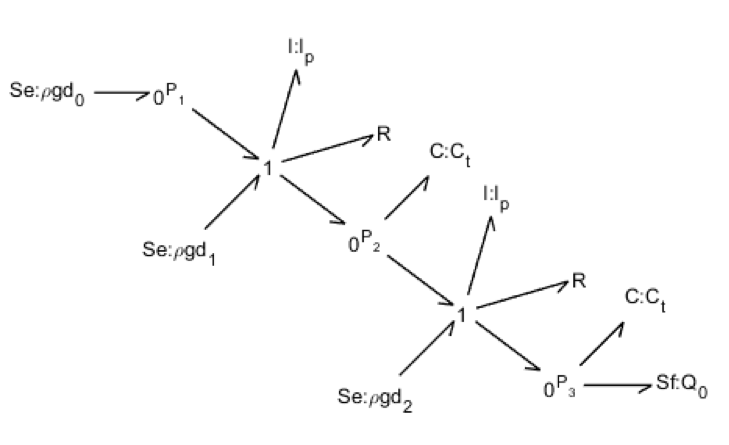 The pipe resistances in this system are nonlinear and behave according to the constitutive law:

which is shown graphically in Figure 3. 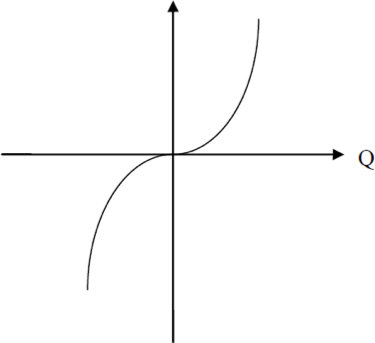 Remember that in fluid systems, we use Q for volumetric flow (not displacement) and V as volume (not velocity).

Define all system inputs for the effort and flow sources. The effort sources are the pressures due to gravity and are constant with respect to time. The flow source is the turbine flow \(Q_0\). When the turbine is delivering power the steady state flow \(Q_0\) out of the pipe is \(1.5\frac{m^3}{s}\). The turbine flow begins as \(Q_0=1.5\frac{m^3}{s}\) at \(t = 0\). At some time of your choosing, the turbine will begin to turn off. Over the next 0.15 seconds, the turbine shuts down and flow \(Q_0\) decreases linearly to zero. Define \(Q_0\) before, during, and after the shut-down period in an input function file.

You will also likely need to take turbine flow (\(Q_0\)) as an extra variable. You may find it useful to define the tank heights as extra outputs as well.

Your goal is to find the minimum cross-sectional area of the surge tanks, so that the flow to the turbines can be shut off quickly without overflowing the tanks and drowning the people of Sacramento.

Choose a starting tank area \(A_t\) and simulate the system. Determine the height of the water in the tanks and plot the heights as a function of time. Plot the height of the water in the tank. Increase or decrease the tank area by increments of 0.05 \(\textrm{m}^2\) until you find the smallest possible tank area that does not cause the tanks to overflow when the turbine is shut off Refer to Figure 1 to find the maximum water height in either tank.

Determine your simulation time parameters. In order to gauge how long and what time step to use to simulate the system you will need an idea of the natural frequencies. Since the system is nonlinear, a straight forward frequency analysis is not possible. But since the non-linearity of the system is in the resistance, a rough estimate can be calculated using only the compliance and inertial properties of the system. Here is a hint:

The report should follow the report template and guidelines.